Immediate action is needed to revise NC Law GS_96-14.9c to reflect a more realistic view of what people with disabilities can do. We must stop treating them differently than NC workers who are eligible for unemployment benefits.

Imagine you have worked for 9 years and you lose your job through no fault of your own. You then file for unemployment benefits and are denied because the state you live in says you are “not able” to work…. how would you feel? What would you do? What if you didn’t know what to do or couldn’t do it on your own?

Workers with disabilities that have been recently laid off and can’t find new jobs due to COVID-19 are now in crisis because of state law NC GS 96-14.9c. North Carolina and Wisconsin are the only two states we have found that deny unemployment benefits to people who receive or apply for disability-related benefits.

People with Disabilities Can and Want to Work
This law undermines the spirit of being an “Employment First” state. In order to be eligible for unemployment, a person had to work for a significant period of time. Yet, GS_96-14.9c creates a blanketed assumption that all SSI/SSDI beneficiaries and applicants are “not able” to work– this is untrue and unconstitutional.

The Supreme Court held by unanimous decision in Cleveland v. Policy Management Systems Corp, “that a claim for Social Security disability benefits is often consistent with a claim for relief under the Americans with Disabilities Act (ADA) even though there must be an ability to work in order to obtain relief under the ADA. The Court noted that, under the presumptions embodied in our five-step sequential evaluation process, a person can qualify for Social Security disability benefits even though he or she remains capable of performing some work. Similar logic applies to applications for unemployment benefits.” SSA Chief Judge, Frank Cristaundo (Source)

GS_96-14.9c also prevents people who have applied for disability-related benefits from receiving unemployment. Per Chief Judge, Frank Cristaudo, “It is often uncertain whether we will find a person who applies for unemployment benefits ultimately to be disabled under our rules, and our decision-making process can be quite lengthy. Therefore, it is SSA’s position that individuals need not choose between applying for unemployment insurance and Social Security disability benefits.” (Source)

The State of NC has already invested considerable resources through the Division of Vocational Rehabilitation to help those impacted by this law return to work and reduce their reliance on SSI/SSDI. Denying unemployment forces people back on the disability system and makes it impossible for them to maintain the standard of living they achieved by working their way off of disability benefits in the first place.

“SSDI and UI are vital insurance systems established for different purposes. Receiving UI and SSDI concurrently is legal and appropriate. This has been the long-standing position of the Social Security Administration and of the courts. Individuals qualify for SSDI because they have significant disabilities that prevent work at or above Social Security’s Substantial Gainful Activity level (earnings of $1,090 per month, in 2015). At the same time, the Social Security Act encourages SSDI beneficiaries to attempt to work, and those who have done so at a low level of earnings but have lost their job through no fault of their own may qualify for UI. As highlighted in a 2012 Government Accountability Office report, less than one percent of individuals served by SSDI and UI receive concurrent benefits, and the average quarterly concurrent benefit in the fiscal year 2010 totaled only about $3,300 (or an average of $1,100 per month).” (Source)

“These extremely modest benefits can be a lifeline to workers with disabilities who receive them, and their families – and as permitted by law are neither “double-dipping” nor improper payments. We are deeply concerned by any prospect of worsening the economic security of workers with disabilities and their families. This creates new disincentives to work for SSDI beneficiaries, by penalizing individuals who qualify for both SSDI and UI because they have attempted to work, as encouraged by law. The creation of a new work disincentive runs directly counter to our shared goal of expanding employment opportunities for people with disabilities.” (Source)

Immediate Action is Needed
This law is disproportionately harming people with disabilities during Covid-19. Unemployment benefits have been expanded to help gig workers, people who received severance, sole proprietorships, etc. What about taxpayers with disabilities? What happens to all of the money their employers paid into the system on their behalf?

We’ve struggled to receive data from DES to determine how many people are impacted. And we know people with disabilities that have been denied unemployment and are too afraid to speak up. Therefore, we created a petition to give them a collective voice. To date, we’ve received more than 1,825 signatures on a petition to support this rule change. A state-by-state comparison with possible revisions is included on page 3. https://www.change.org/p/roy-cooper-change-nc-state-law-that-prevents-people-with-disabilities-from-receiving-unemployment

If you are willing to lend your voice or do something to help workers with disabilities in NC, please reach out to Lindsey Braciale directly at lindsey@advocations.io 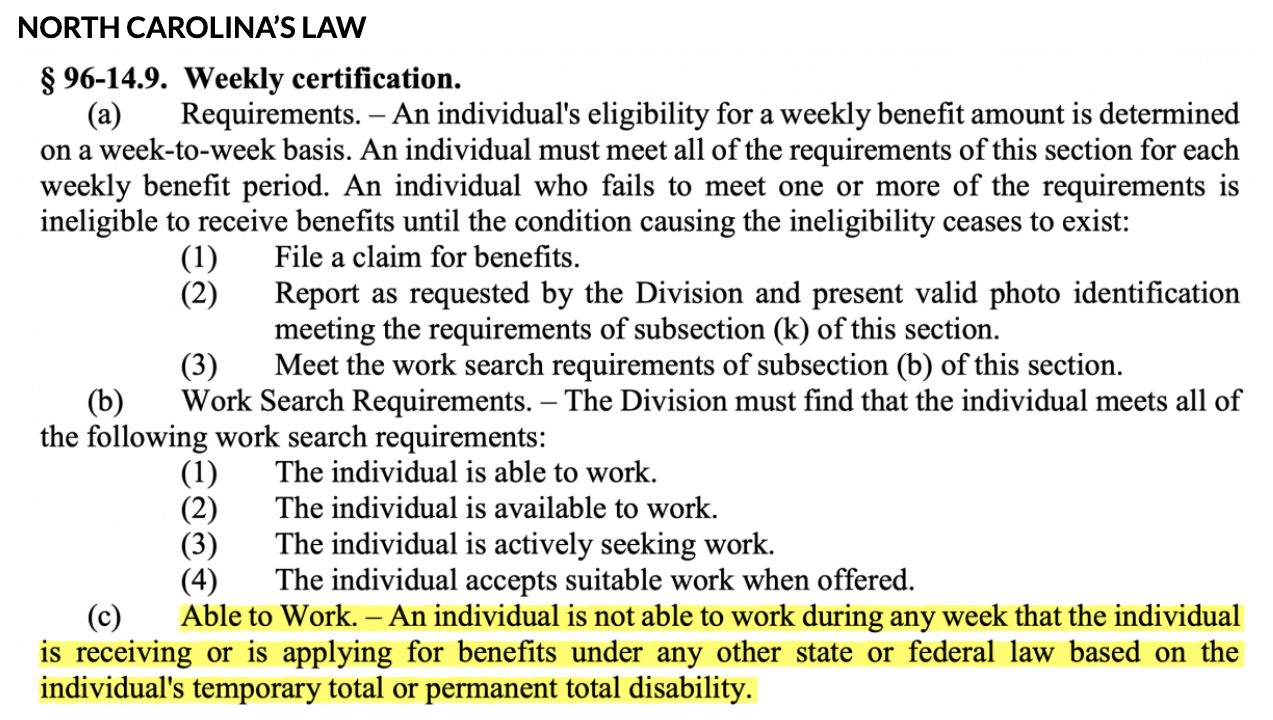 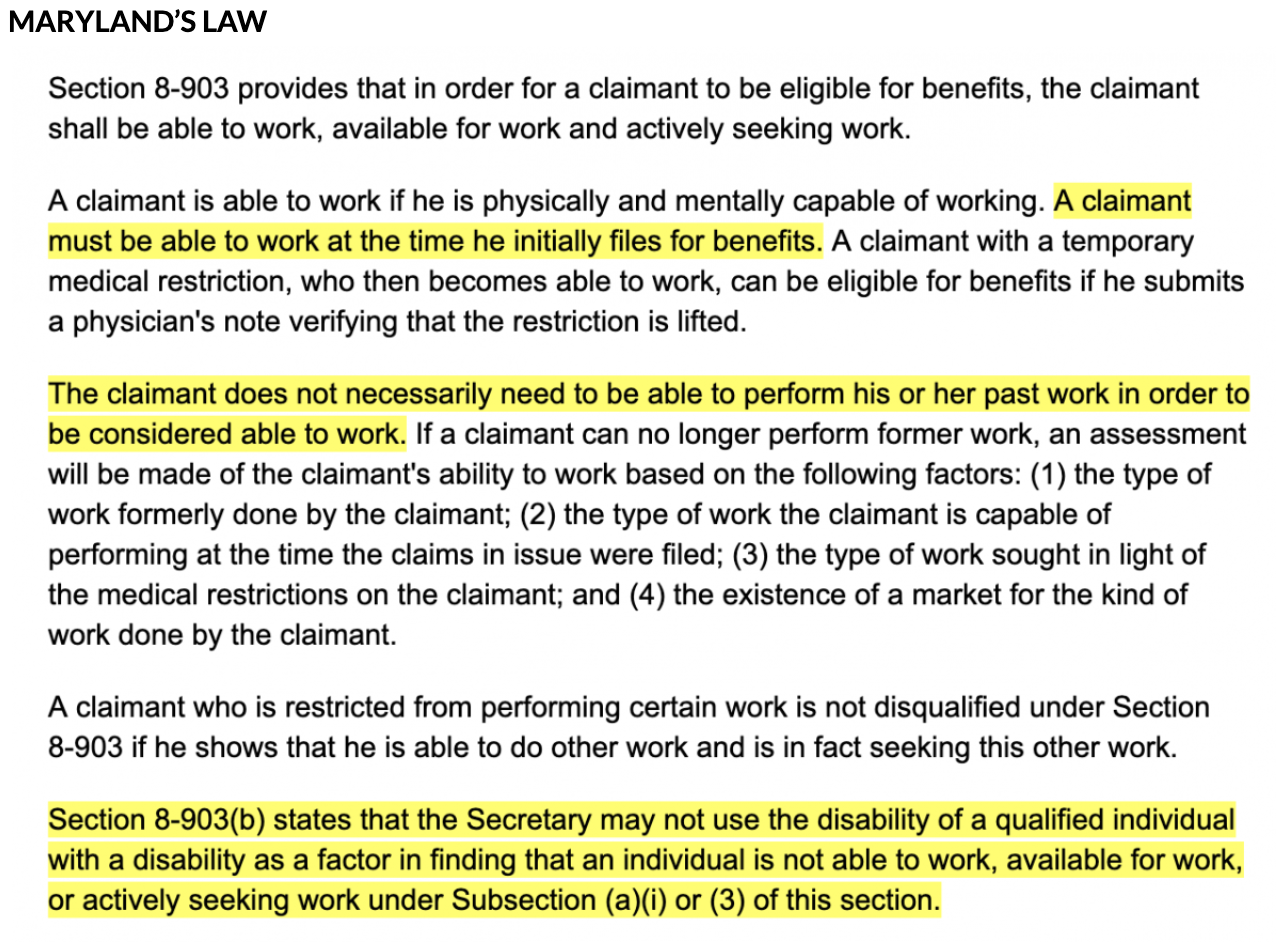 We employ people with disabilities at inclusive companies nationwide

© • Advocations • Powered by grit and a lot of caffeine